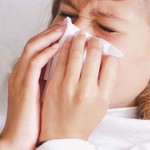 After an unusually slow start, flu season has finally arrived, and it is likely that more and more people will be affected as everyone returns to work and school after the Christmas break. The main flu virus circulating this year is called H1N1, also known as ‘swine flu’, which unlike other strains of flu, commonly affects young people and pregnant women, in addition to the more usual risk groups.
The flu virus is spread by small droplets of fluid, coughed or sneezed into the air by an infected person. These droplets can travel through the air for up to a meter, and infect anyone who breathes them in.  The flu virus can also be spread if an infected person touches his or her nose or mouth, and then touches someone else. Likewise, if an infected person touches a surface such as a door handle with unwashed hands, the virus may be transmitted to another person touches the same surface.

The flu generally starts with chills, followed by a high fever, extreme fatigue, and aches and pains. These symptoms may be accompanied by a sore throat, cough, and nausea. Most people who get the flu feel very ill indeed, and are generally unable to get out of bed for several days.

The symptoms usually appear two to three days after exposure to the virus, and subside after a week or so, although the cough and feeling of tiredness may persist for much longer. In elderly people, pregnant women, and individuals with lung problems or weakened immune systems, catching the flu can be much more serious due to the increased likelihood of developing complications such as pneumonia.

Unfortunately, antibiotics are not effective in the treatment of flu, since it is caused by a virus rather than by bacteria. Antiviral drugs such as Tamiflu may be prescribed for people at high risk of becoming severely ill, such as elderly people or those with weakened immune systems, but they generally need to be taken within the first 48 hours after symptoms appear. They may also cause side effects, and are of no real benefit to otherwise healthy people who are unlikely to develop complications from the flu. Paracetamol and ibuprofen are widely used to reduce fever and treat the aches and pains that accompany the flu, but they tend to reduce the immune response to the virus and may therefore prolong the illness.

As usual therefore, prevention is better than cure. Wash your hands frequently with ordinary soap and water, and keep surfaces such as door handles, telephones and computer keyboards clean to help minimize exposure to the virus. Always use a tissue to cover your nose and mouth when you cough or sneeze, and put it in the bin straight away. There are also many safe and effective ways to boost your immune system, to help to minimize the risk of catching the flu, and to improve vaccine efficiency in people who wish to avail of the flu jab.

One of the best herbs for enhancing immune function is Echinacea. It has an excellent reputation for helping to resist infection. Essential nutrients for a healthy immune system include Vitamin C and zinc. Elderberries, which are rich in vitamins A and C and bioflavonoids, are also a wonderful tonic for the immune system and they have an antiviral action, which helps to prevent colds, flu and other viral illnesses.

If you are unfortunate enough to catch the flu, make sure you keep warm, get plenty of rest, and drink plenty of fluids to prevent dehydration. Your local medical herbalist can provide an individually tailored blend of herbs to improve immune function, help fight the infection, and provide relief from symptoms.